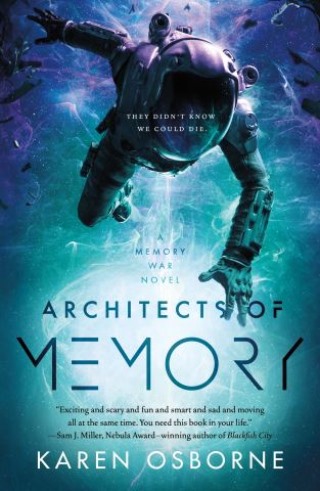 SyFY Wire SFF Reads to pick up in September

Terminally ill salvage pilot Ash Jackson lost everything in the war with the alien Vai, but she'll be damned if she loses her future. Her plan: to buy, beg, or lie her way out of corporate indenture and find a cure. When her crew salvages a genocidal weapon from a ravaged starship above a dead colony, Ash uncovers a conspiracy of corporate intrigue and betrayal that threatens to turn her into a living weapon.

Karen Osborne: KAREN OSBORNE is a speculative fiction writer and visual storyteller living in Baltimore. She is a graduate of Viable Paradise and the Clarion Writers’ Workshop, and won awards for her news & opinion writing in New York, Florida, and Maryland. Her short fiction appears in Uncanny, Fireside, Escape Pod, Beneath Ceaseless Skies, and more. Archtects of Memory is her first novel.